Surf spot atlas made by surfers for surfers
Enjoy and contribute!
Home

When arriving at Sydney with the van after 3000kms criss-cross along the east coast the question was: Has it been worth all the expense and struggle doing a trip half around the planet? Well, to be honest, I don't know until now...but the more it gets to the past, only afterglows kept in mind. All the bugs and moskitos that tumbled to the ground hit to death by our smokey coil are forgotten. Memories on B-double-semi monster trucks overtaking in the darkness at oncoming traffic are fading away.

What's left in mind as it was no more than a day ago is the great landscape down the coast from Bundaberg to Bondi Beach and all the friendly people my wife Marianne and me met along the way. Not a whiff of localism appeared but only sporty competition.

After a 30-hour flight from Frankfurt to Dubai, Singapure and Brisbane we picked up our prereserved campervan and went up the sunshine coast with stops at Mooloolabah, Alexandra Headlands, Coolum and Noosa.

As we decided to go to the southern end of the Great Barrier Reef the next stop was the Bundaberg area. The swell was very small so we abandoned the plan to go further north to Agnes Water. At Moore Park and Eliott Heads we found nice places to stay and at Bargara a couple of waves have been ridden.

Heading south again we made a longer stop at Rainbow Beach. All the way from town to Inskip Point is seamed with bushcamps right at the beach inviting us to stay a couple of relaxed days with surf and wildlife. A short trip with the barque to Fraser Island brought unforgettable impressions.

So far we had enough wilderness and it was only consequent to step into the Gold Coast with the world famous Surfers (Paradise) Hell with a big step forward, but as fast as we went in town we got away. 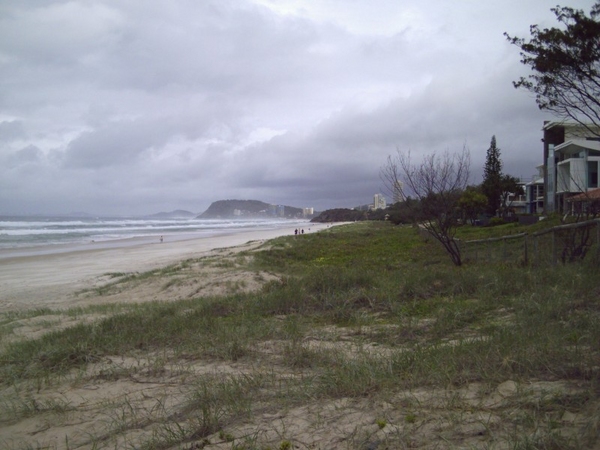 At home we have galores of this kind of mass tourism cities so it's not necessary to waste time at Down Under with it...Unfortunately, it was the second day of consecutive bad weather plus high wind so Buleigh Heads, Currumbin as well as Kirra Point had all been too rough and high for me. To make matters worse it was weekend so the breaks were full of kamikazes ready to risk their neck for a ride. After all we found a relaxed place at Fingal Head overlooking the coast back up north with all those high surf hot spots.

Well, the highlight of our tour was still to come as we visited our friends Gay and Ken and the kids in their home at Cabarita Beach. It was our first get-together since more than ten years, so the mood was unbeatable. While Ken and me dropped into a couple of walls at the point, the wives had to talk a lot.... 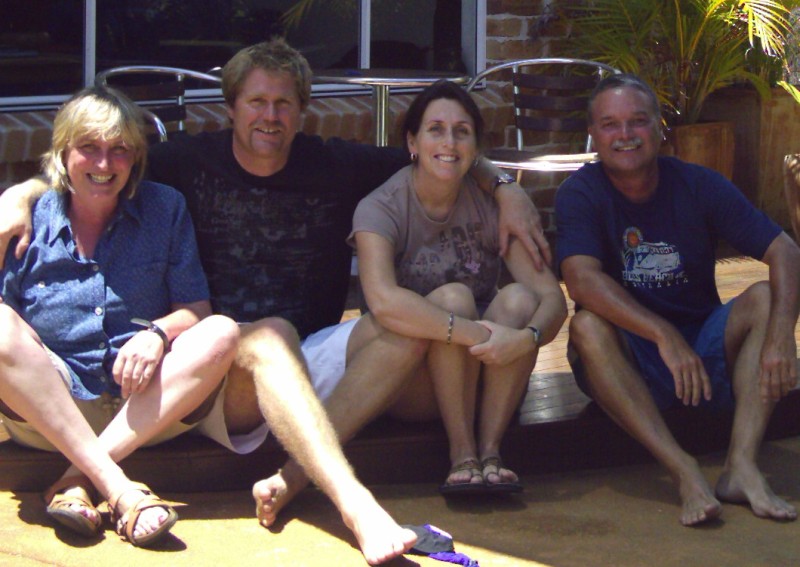 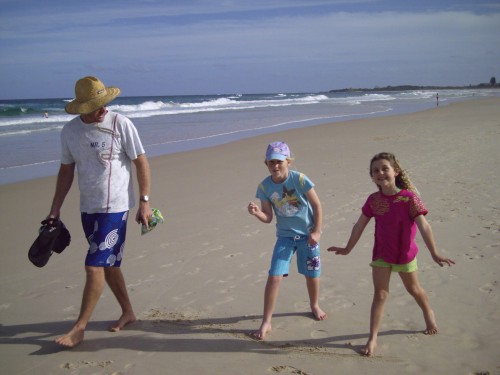 Just in time Kana Loa sent a nice swell and dropped the wind so a clean 4 feet wave (hawaiian sized) peeled in so we had a great time at the beach and later on at night with a "australian" BBQ - means just enough to feed the uptown, too. 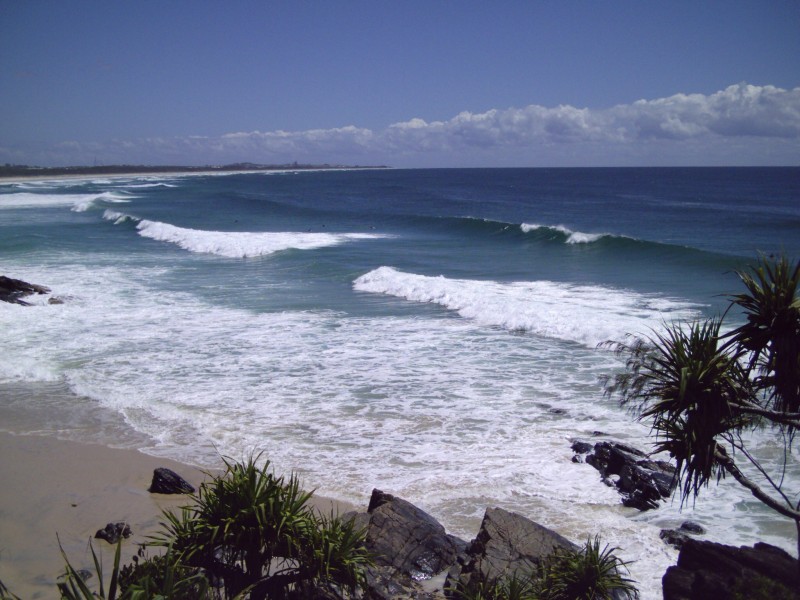 Cabarita at it's best!

All good things have to come to an end, so leaving Cabarita was a little sad.

Heading south to Evans Head we passed melodic names like Pottsville, Byron Bay, Snapper Rock, Lennox Head and Ballina. All those places are worth to stay for a week but time was running through our fingers, so it was only four days for the whole stretch.  Evans Head was like coming home for us, even though we never been there before. The place has similar conditions to Les Cavaliers in Anglet/France, so it was a jump-in-and-feel-well session. When leaving Evans Head I felt sure to come back one fine day!  Just a couple of kms south we drove into the Bunjalung NP 'cause after two weeks of Sunshine-Gold and Tweed Coast we sought some wilderness and got not disappointed by the beauty of this section of lonesome coastline.

We almost forgot time and tide and suddenly we realized that we will run short with the couple of  days left to go down to Sydney and get our flight back home.

Sadly we cancelled a longer stop at Coffs Harbour so we missed Wannasurf member Reggie6966 - sorry but we surely stopover next time!
Like Coffs we found a dozen other places worth to stay longer, Port Macquarie, Bonny Hills, Forster, Shelly Beach, Avoca...and...and...and. 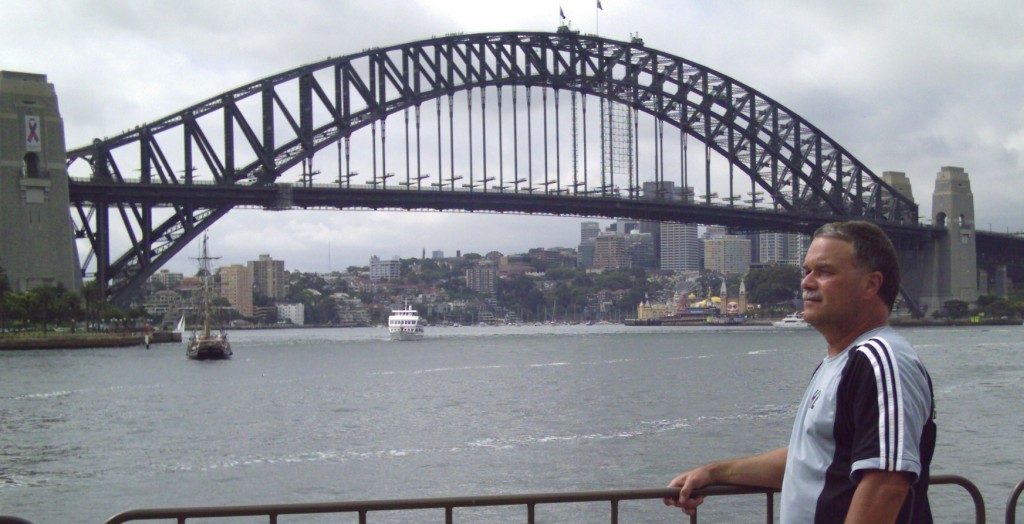 The last days at Manly and Bondi spun away, and there is still the

unanswered question "was this all worth it?" Well, You should find out yourself, for us - it was a doozie!

Map of the trip

This is an interactive map! Use controls to pan and zoom this map.

RSS All the RSS feeds of Wannasurf.com

Newsletter All news by email